The Cincinnati Reds offer condolences to the family, friends and teammates of Hall of Fame second baseman Joe Morgan, and share in the loss of this beloved member of the organization. A special advisor to Reds CEO Bob Castellini and the club's baseball operations department since 2010, Morgan died last night at age 77.

"The Reds family is heartbroken. Joe was a giant in the game and was adored by the fans in this city," Castellini said. "He had a lifelong loyalty and dedication to this organization that extended to our current team and front office staff. As a cornerstone on one of the greatest teams in baseball history, his contributions to this franchise will live forever. Our hearts ache for his Big Red Machine teammates."

A 10-time All-Star and 5-time Gold Glove second baseman, Morgan was elected to the Reds Hall of Fame in 1987 and to the National Baseball Hall of Fame in 1990. The 2-time National League MVP played for the Reds from 1972-79, during the glory days of the Big Red Machine.

Morgan won his first Most Valuable Player award in 1975, when he guided the Reds to a World Series victory over the Boston Red Sox, and he was MVP again in 1976 as the Reds swept the Yankees for their second straight World Series championship. Morgan remains the Reds’ all-time stolen base leader (406), and he finished his 22-year professional career with 268 homers, 1,133 RBIs and 689 stolen bases for the Astros, Reds, Giants, Phillies and Athletics.

Joe Morgan Through the Years 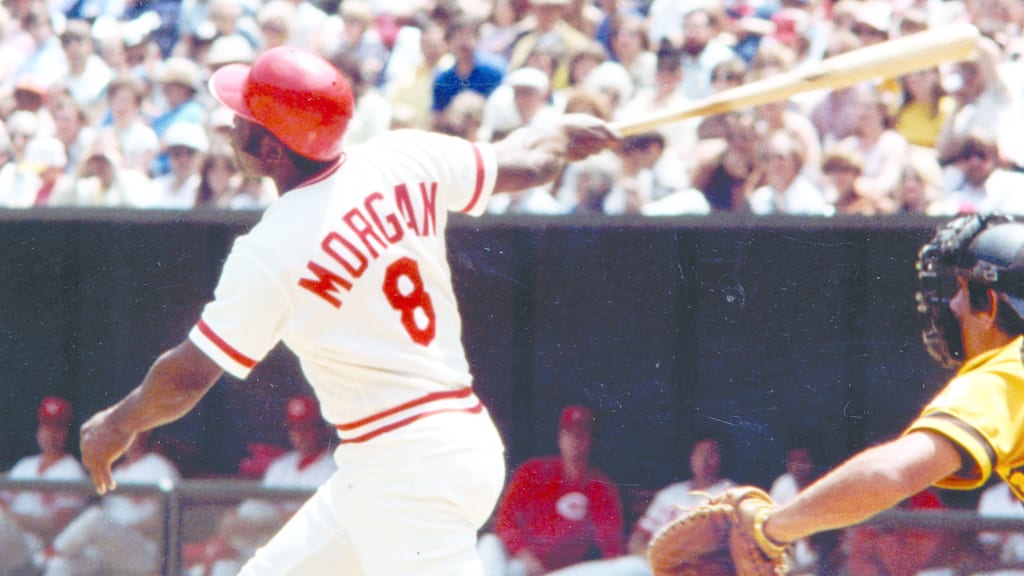 Hall of Famer Joe Morgan was a two-time National League MVP Award winner, 10-time All-Star and five-time Gold Glove winner. He spent eight seasons with the Reds from 1972–79 during the glory days of the Big Red Machine.

He was named the NL’s Most Valuable Player in 1975, when he guided the Reds to a World Series victory over the Boston Red Sox. Morgan batted .327 with 67 stolen bases that season. He turned the trick again in 1976 when he received National League MVP honors as the Reds roared to their second straight World Series championship with a four-game sweep of the New York Yankees. Morgan batted .320 in 1976, with 60 stolen bases.

Morgan is the Reds’ all-time stolen-base leader (406), and his 266 home runs as a second baseman rank third in baseball history behind Jeff Kent and Ryne Sandberg. He finished his 22-year professional career with 268 homers, 1,133 RBIs and 689 stolen bases for the Astros, Reds, Giants, Phillies and Athletics.

After his playing career, it didn’t take long for Morgan and his remarkable career achievements to be formally acknowledged. Morgan was inducted into the Reds Hall of Fame in 1987, entered the National Baseball of Hall of Fame on the first ballot in 1990, and had his No. 8 retired by the Reds in 1998.

And on September 7, 2013, the Reds dedicated a statue to Joe Morgan outside of Great American Ball Park. Morgan was the second of the “Big Four” players from the Big Red Machine to be bestowed the honor. The statue, located on the corner of Joe Nuxhall Way and Second Street, captures Joe Morgan as he breaks for second base on a steal attempt. Morgan’s family, the rest of the “Great Eight,” other former teammates, Reds personalities and fans all congregated on that special September day to pay tribute to perhaps the greatest second baseman of all time.

A Look Back at the Career of Joe Morgan

Former teammates and other Reds greats talk about Joe Morgan